The Ankeny Centennial High School National Honor Society held its induction ceremony in the ACHS auditorium  on Monday, May 23rd, at 7:30 p.m. Ankeny Mayor Mark Holm gave the keynote address.  40 sophomores, 29 juniors, and 7 seniors were admitted to National Honor Society. The ceremony was attended by many parents, friends, and family members.

Students apply to become members of National Honor Society, an organization chartered by the National Association of Secondary School Principals, and which has been in existence since 1921. Successful applicants must have a minimum unweighted grade point average of 3.5 or above, a demonstrated record of scholarship, extracurricular involvement, community service, and character.

Tim Garner is the sponsor of the Ankeny Centennial High School chapter of National Honor Society, and he can be reached at tim.garner@ankenyschools.org, or by telephone at 515-965-9610. 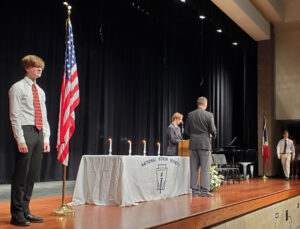